Mari and Momo Kodama grew up in Germany and France playing piano duo repertoire at home and performed together as a duo for the first time at the Salle Gaveau in Paris performing the entire concert from memory in 1989. With a repertoire that ranges from CPE Bach to contemporary music, their program encourages listeners to listen to the music from different angles.

Each year they take time out of their busy solo careers to work together and have commissioned and premiered many new works. Commissions have included Jean Pascal Beinthus’ ‘He got Rythm’ at the Waldbuehne Berlin with the Berliner Philharmoniker and Beinthus’ ‘Cinema Rhapsody’ with the Osaka Century Orchestra in Osaka, Japan and in Monte Carlo with Monte Carlo Philharmonic; Rodolphe Bruneau Boulmier’s ‘El Torcal’ for two pianos at the Muziekgebouw in Amsterdam; and Ichiro Nodaira’s ‘Echo dans le Bois’ for two pianos in Berkeley, California.

In 2022, they performed a program around America, by Barber, John Adams, Samuel Adams and Steve Reich at La Scala in Paris and in 2023 Mari and Momo Kodama will perform a program of Etvos, Bach, Kurtag, Mozart and Reger in Muziekgebow in Amsterdam.

Their recordings include a highly acclaimed release with Martinu’s Double Concerto with Lawrence Foster and the Marseille Philharmonic (Pentatone 2018) as well as Tchaikovsky’s Ballet Music transcribed by Arenski, Debussy and Rachmaninoff (Pentatone, 2018). In 2023, they will record the Mozart’s Double and Triple Concerto as well as Poulenc’s Double Concerto with the Orchestre de la Suisse Romande and Kent Nagano, followed by an album of music and transcriptions of Saint-Saens.

Reger
Variations on a theme of Mozart

Reger
Variations and Fugue on a theme of Mozart Op. 132a

St Saens
Carnival of the Animals 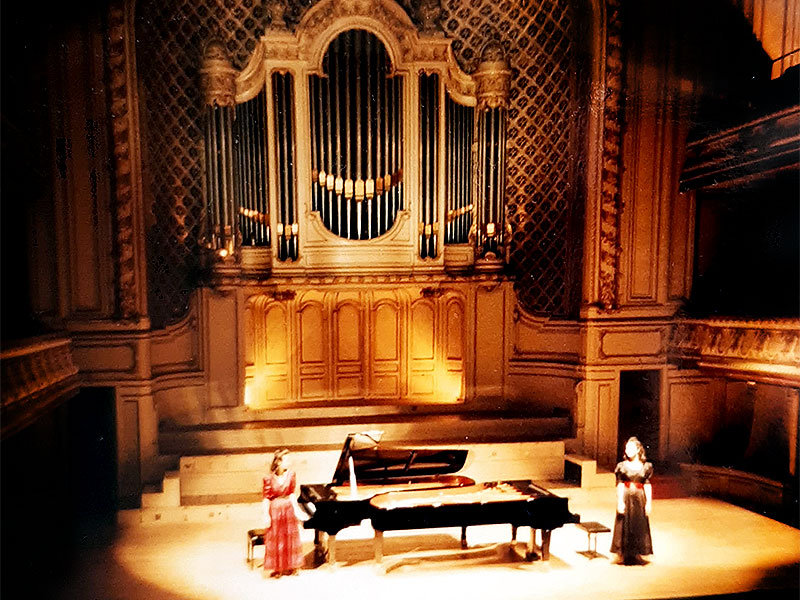